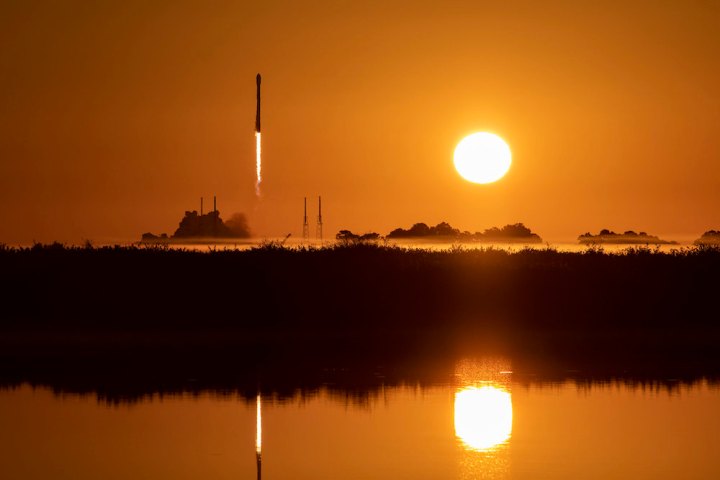 The growing frequency of SpaceX launches from the Kennedy Space Center in Florida gives photographers plenty of opportunities to train their long lenses at the ascending rockets in the hope of capturing something special.

SpaceX’s latest launch took place during sunrise on Wednesday morning, and a short while later it shared several stunning images of its Falcon 9 rocket climbing toward space.

The Falcon 9 rocket was carrying a GPS satellite to orbit for the U.S. Space Force and is shown against a dramatic orange backdrop, with a large rising sun reflecting in the water below.

As usual, SpaceX livestreamed the mission using multiple video cameras to track the rocket as it headed to space.

Following stage separation, the first stage returned to Earth and performed a perfect upright landing on the A Shortfall of Gravitas droneship stationed in the Atlantic Ocean.

The first-stage booster supporting the mission previously launched the four Crew-5 astronauts to the International Space Station in October 2022. Bringing it safely back to Earth means it can be refurbished and used again for an upcoming mission.

With 2023 already looking like a busy year for the company, it’s likely to achieve even more launches over the next 12 months. With that in mind, we can expect to see more spectacular images from SpaceX before too long.

Today’s tech news, curated and condensed for your inbox
Check your inbox!
Please provide a valid email address to continue.
This email address is currently on file. If you are not receiving newsletters, please check your spam folder.
Sorry, an error occurred during subscription. Please try again later.